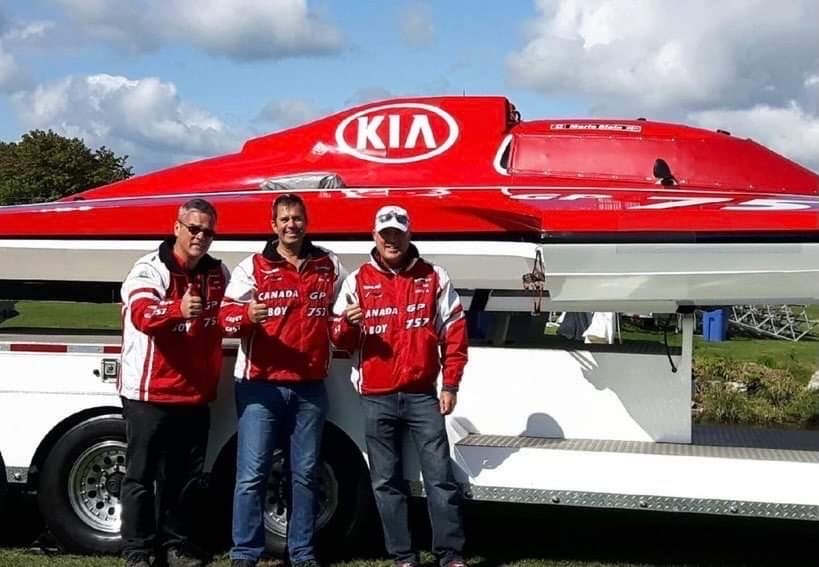 After 5 years of absence, Mario Blain announced that he would return to the Hydroplane Racing League (HRL) circuit in 2022 aboard GP-757 Canada Boy. He acquired the GP-444 from Frank Richardson and two engines from Paul Hewitt and will be driving a brand new Canadian boat this season.

Accompanied by his loyal team of Robin Demers, Claude Auclair, Denys Charette and Serge Blanchette, Mario sees 2022 as a learning season. Work on the boat, by Bert Henderson and Jamie Auld, has only just begun and the shortage of parts means that the team is not planning to race in Cambridge, but is instead aiming for a first start at the Beauharnois Regatta on June 4 and 5.

Mario Blain’s departure in 2017 was not motivated by a loss of passion for the sport, but by a lack of time and funding. My team and I have racing in our blood,” he explains. I’ve been wanting to make a comeback since September, but until today, Robin, the co-driver and team leader, was short on time, but things have improved.”

Robin Demers is an integral part of this comeback, not only as a team leader, but more specifically as a co-pilot. Now 61 years old, Mario Blain wishes to drive, but is very happy to announce that Robin will do more than 75% of the races.

Between the races he will drive, Mario will be in the pits with his daughter Stephanie. He will therefore devote much of his time to the success of the Canada Girl, a 2.5 liter boat.

The Grand Prix class for the 2022 season has twelve entries and promises to be very competitive. The GP-757 will replace the GP-444 which was to be driven by Kent Henderson.

Indeed, Mario wanted to dispel any rumors that his team would take back the number 444 and the name GP Valleyfield. “I would never dare to do such a thing! The GP Valleyfield is a legend in our sport and its history must remain with the Théorêt family,” said the driver. The Canada Boy will also sport a brand new design for the occasion.

The team would like to thank HRL, Frank Richardson for giving them the chance to continue the project, Bert Henderson and Jamie Auld for building the boat, and Paul Hewitt for the engines. A thought also went to Nicolas Rousse, Nicolas Martel and Jeff Richard for their involvement in the initial project of the return of the 444.