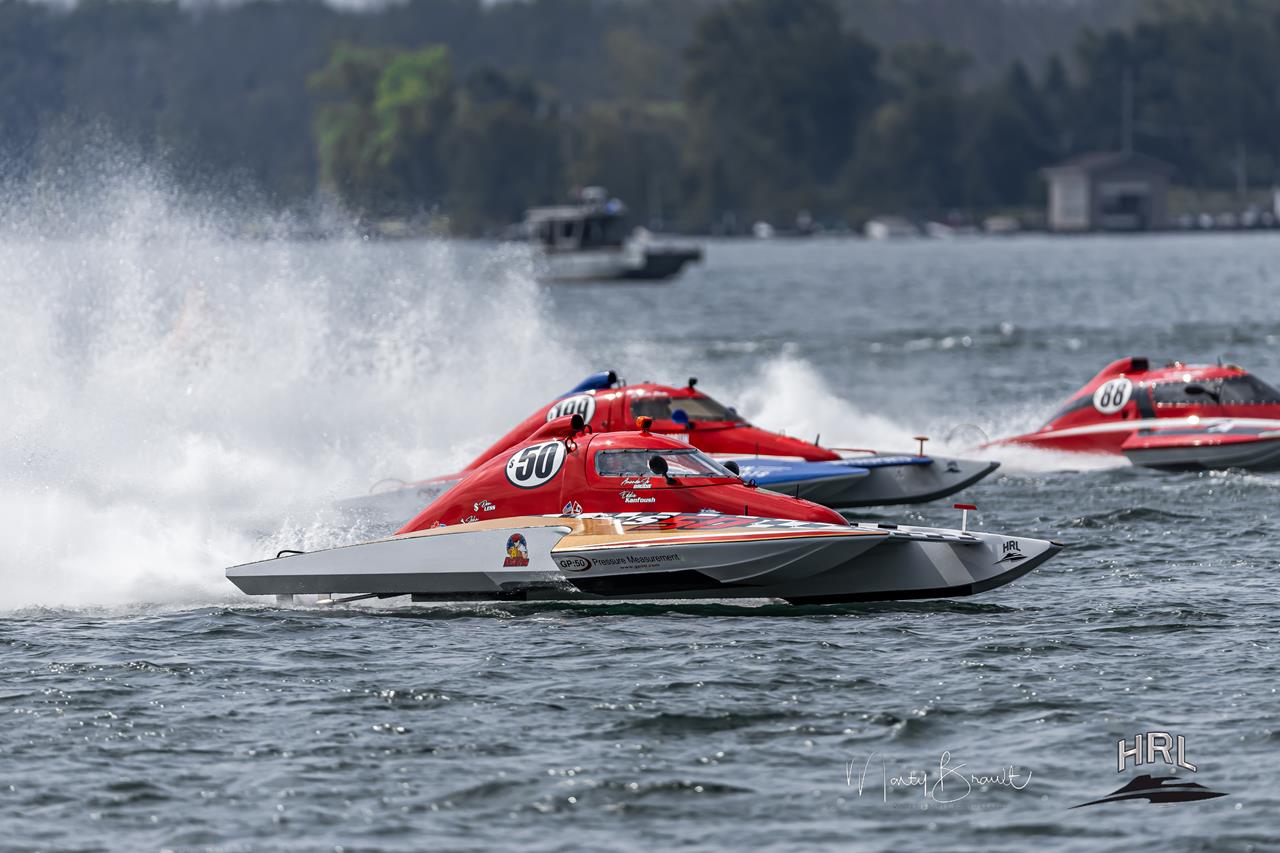 Last weekend, the HRL held its fifth event of the season in North Tonawanda. Despite the threatening winds that kept the drivers on their toes throughout the weekend, they were still able to put on a good show and avoid accidents.

This weekend, it was local driver Eddie Kanfoush (S-50) who stole the show in the 2.5 liters class. Kanfoush took three wins in three outings, which allowed him to be crowned the winner of the weekend by virtue of the points collected in qualifying, as the final of this class was cancelled due to dangerous conditions on the water.

Leading the championship after the Valleyfield Regatta races, Stéphanie Blain (S-757) had a more difficult weekend and slipped to second place in the standings. With a difference of only 4 points with Blain, Simon Fortin (S-199) is now in first place.

The Formula 2500 class final was also cancelled due to poor track conditions. Guillaume Charette took the win in Sunday’s 3B race in the F-44 “Wave Dancer” and won the overall by one point over Grant Hearn (F-14). Steve Armstrong (F-92) still leads the class in the championship.

Bobby King, driving the H-242 “LDC Construction” repeated his Valleyfield accomplishment and won the Hydro 350 class final, with Michaël Tremblay (H-8) and Tyler Kaddatz (H-195) finishing second and third respectively. Michaël Tremblay remains in first place, but only 5 points ahead of Tyler Kaddatz. Martin Rochon is 25 points behind in third place in the championship.

2022 is the year of Andrew Tate in the GP-777 “Steeler”. The championship leader once again took the win in the final, but it wasn’t easy. After seeing the boats of Ken Brodie (GP-50) and Ken Lupton (GP-577) come to a stop, Tate went after Jack Lupton (GP-33). But on the third lap, as Tate reeled in the GP-33, Lupton closed the door on him, forcing him through his water tail. Unfortunately for Jack Lupton, his first HRL win would have to wait, as after several minutes of watching the video replays, HRL officials decided to give him a penalty denying him the win. Andrew Tate won his fourth consecutive race, followed by Robin Demers (GP-757) who took his first podium and Yannick Léger (GP-21) who consolidated his second position in the championship.