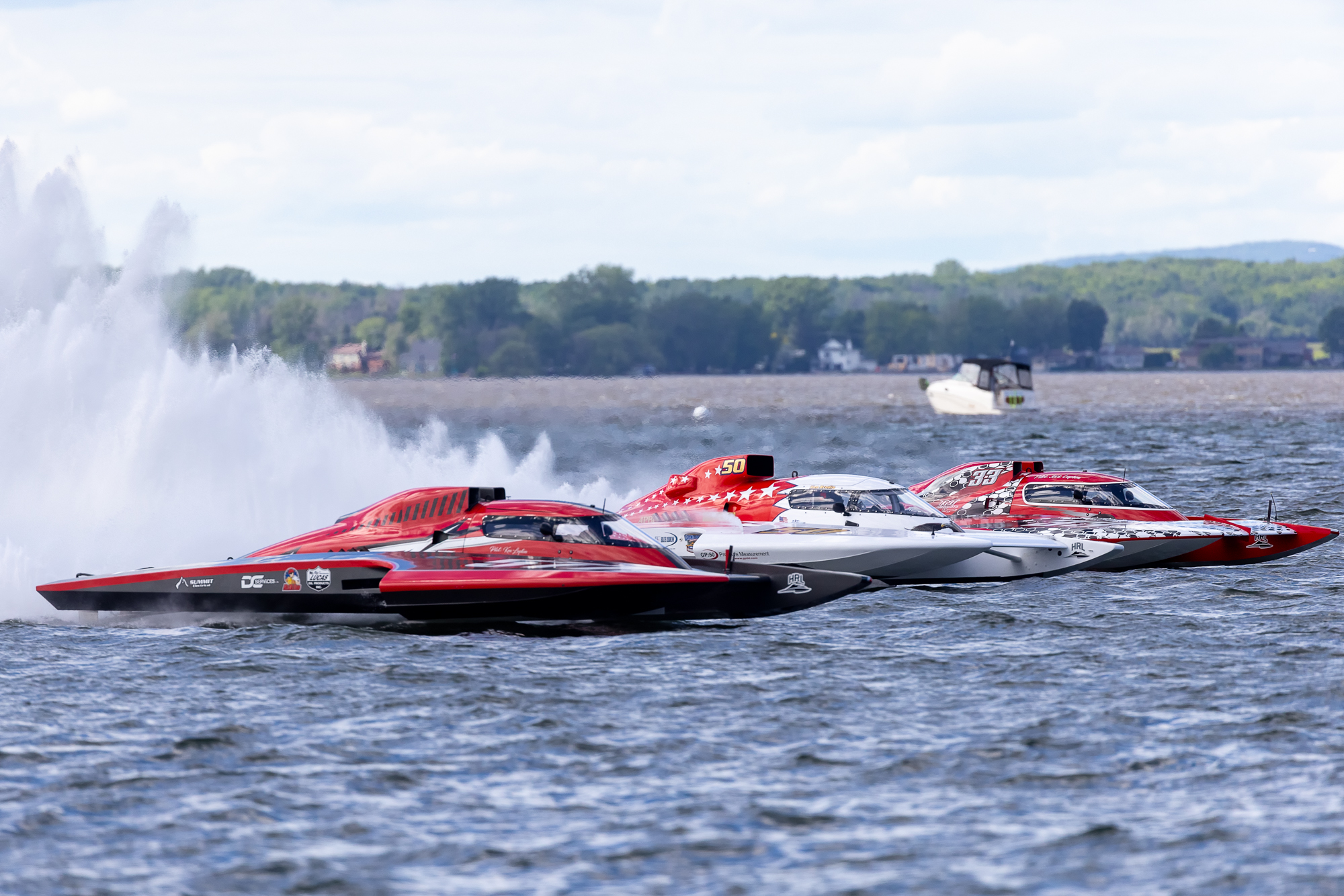 The victories of driver Andrew Tate continued at the 15th Beauharnois Regatta as the American from Walled Lake, Michigan, once again did the double in each of the Hydro 350 and Grand Prix finals to steal the show at the event held at Bourcier Park.

“Driving in one final after the other is always tough, especially when the conditions are difficult on the water,” commented Andrew Tate in an interview on the dock in the pit area.

Holding the Grand Prix pole with two first place finishes, Tate literally surged to the initial turn at the start and gained a few boat lengths on New Zealander Ken Lupton. The GP-777 “Steeler” stayed in the lead, chased by the GP-577 “Lucas Oil” until lap 3before the new “Kiwi” boat came to a halt due to mechanical problems.

Ken Lupton’s withdrawal allowed Jeff Bernard to take the second step of the podium with Michael Grendell’s “Bad Influence” GP-79. Salaberry-de-Valleyfield native Yannick Léger, who lost the use of his GP-21 “Supernova” stabilizer before the start of the race, took advantage of the problems experienced by the other 3 participants in the final to finish in 3rdplace, as he had done in Cambridge.

Jack Lupton (GP-33) and Ken Brodie II (Freedom GP-50) were forced to be towed away after an exciting duel for 4th place. There were 8 entries in the Grand Prix at Beauharnois, including the “Miss Cleopatra” GP-104 driven by Marc Lecompte and the “TM Special” GP-35 driven by Bobby Kennedy.

In the Hydro 350 class, Andrew Tate was unbeatable in the “Penzoil” H-300, sweeping the titles of two heats and the final. In the second to last race of the day, Tate resisted Tyler Kaddatz’s push in the H-195 “Ah Sum Secret” and Kaddatz was eventually penalized for changing lanes following the start in turn one.

This reprimand gave Kent Henderson the 2nd position in the ” Team Toban ” H-519 and Erik Mc Kenna, who had the door closed on him in the initial turn, completed the podium in ” La Bête Noire ” H-999. Martin Rochon (RTX Racing H-773) took 4th place and Tommy Shannon (Dognasty H-306) finished 5th while Marc Lecompte stopped on the first lap in the ” Gestion Unique ” H-104.

The finals of the 2.5 liter and Formula 2500 classes could not be presented due to the rough waters stirred up by the northwest winds. The results of the only qualifying event confirmed the winners of the weekend.

In Formula 2500, a win by John Shaw in race 1B gave him the top spot following the qualifying round in Doug Martin’s “F-43”, with which he triumphed in Cambridge. teve Armstrong (Tenacity F-92) and Tommy Shannon (Valleyfield Auto Parts F-4) also reached the podium while Grant Hearn (F-14), Owen Henderson (F-3), Kevin Smith (F-26), Guillaume Charette (F-44) and Richard Haineault (F-17) also qualified for the final.

The next meeting of the season in the Hydroplane Racing League will be in Brockville, Ontario, on July 2nd and 3rd.